Engineer, Pilot, Teacher, Family Man, Astronaut and the first human to set foot on another world has passed from this world.  He was 82.

My other home on the web tends to be a good bit busier than here even though I may only post an update once or twice a year.  Anywho…  Some time around mid day tomorrow Beetlemania.org.uk will go over the 106,000 visitor mark according to sitemeter.  I added the sitemeter link quite a few years after beetlemania went live.  As a result I have no idea just how many visitors may actually have visited.  All this for a little page about the rules of a game I started playing after being punched without warning by a cousin who doesn’t even remember the incident.  Who’d have thunk?
Posted by HerrBGone at 8:18 PM No comments:

Obama hosts Iftar diner in celebration of Ramadan at the White House.  But hes not a Muslim...

Sorry about the commercial ahead of the video.  Most of the legacy media sucks that way.
Posted by HerrBGone at 8:52 AM No comments:

On the Wisconsin shooting

LawDog puts it far more eloquently that I ever could.  And I thoroughly agree with his point about not granting Evil even the smallest bit of fame.  That is one reason I have chosen not to comment about this shooting or the one in Aurora until now.
As Weerd so often says “carry your damn gun!” and I’ll add “even if the sign says you can’t.”
Posted by HerrBGone at 8:09 PM No comments:

I thought I’d pick up some batteries today.  In bulk.  Just incase…
I go through AA batteries like I go through potato chips.  My radios use them.  My point & shoot Fuji A700 uses them.  My Mini-MagLights use them.  Even the ones I’ve converted to LED use them.  They seem pretty much ubiquitous.
But my EDC tac light, a StreamLight LT-2 LED, uses Lithium CR123 batteries.  Not uncommon these days perhaps, but hardly ubiquitous.  In fact the shop I went to was out of them.  And as of this writing the effluent has yet to impact the circulation device for atmospheric gases.
But that got me to thinking…
Most of the blogs I read tend to feature a lot of prepper and fire arms information.  And politics – which often leads rather directly to the fire arms and SHTF prep information.  A frequent point of discussion is ‘which gun to include in your bug-out bag?’  That frequently leads in turn to ammo selection.
Leaving discussion of ‘stopping power vs. weight vs. recoil vs. I shoot really tight patterns with my incredibly obscure Eastern Block revolver chambered in something I have to hand craft because nobody’s made it in over half a century’ aside …
Well, actually focusing in on that last point, as a matter of fact, I made a decision.
Instead of shelling out @ $35- for a block of expensive and occasionally hard to get lithium batteries for my TL-2 LED I decided instead to replace it with something that uses cheap and easy to get AA batteries.
Enter my brandy spanking new StreamLight ProTac 2AA flashlight. 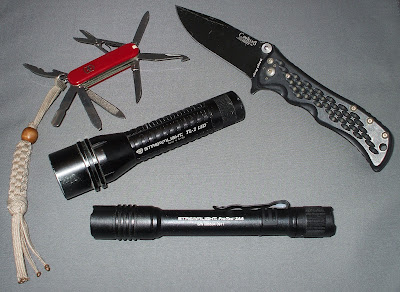 Also in this picture are my little Victorinox Mini-Champ SAK with the gutted paracord fob that I made for it and my Camilus Heat assisted opening knife.  The SAK rides in the ‘magazine pouch’ part of my cell phone holster pretty much every where I go and the Camilus spends its weekends on my belt in a horizontal carry sheath custom wet molded for this knife.
You can see all of the leather cases and sheaths and stuff, oh my! in this post dating from January of last year.  A few things have changed from back then: I’m wearing a modern pair of glasses instead of the vintage 3-piece frames shown most of the time these days.  I’ve replaced the wallet shown with something that holds way more cards.  I’m two or three little note pads along from the one shown and I’ve switched to a modern stainless steel putton-click Parker Jotter fitted with a Fisher Space Pen insert.  I’ve stopped carrying the little tape measure and I found a really skinny Papermate pen that fits the pen holder in the flashlight case.
I was pleasantly surprised to find that even though my custom leather flashlight case was specifically made for the TL-2 LED in head up carry, the new ProTac 2AA fits quite nicely in a head down carry mode.  Because the two flashlights are shaped differently and the new light is notably longer that the old one I was expecting to have to make a new case for the new light.  I will eventually, but I don’t have to right away.  When I finally do I will be skipping the concho snap conversions.  They look really snazzy, but I’ve found them to be problematic in use.
Anywho, what this all boils down to is that as of today the Streamlight TL-2 LED goes into semiretirement.  I’ll probably toss it into my bug-out bag.  Just because…
Posted by HerrBGone at 11:37 PM No comments:

Email ThisBlogThis!Share to TwitterShare to FacebookShare to Pinterest
Labels: Stuff

You can’t make this stuff up…

If you did, nobody would believe you!
A Vermont farmer, Roger Pion (yes, that is how it’s pronounced…), gave the Bigfoot treatment to fully half of the local sheriff’s department’s fleet of cruisers with his tractor.  It seems that he was upset about his recent arrest for, as the article puts it: resisting arrest and possession of marijuana.  I have no idea if he had a little for his own personal use or  if that was his primary crop.  One spectator, or rather, witness to the incident described the tractor as having tires at least fifteen feet high.
And a fun time was had by all…
No one was injured except for the taxpayers who will have to foot the bill for replacing the damaged cop cars.

UPDATE: I find it interesting that in the few minutes it took me to write my take on this story and post it and when I went back to read the original to Mum I find that the AP story at Yahoo News has been replaced with a completely rewritten story.  Some details have been added and others have been omitted.  It’s almost like looking something up in Wikipedia.  What you find depends on when you look and who wrote the most recent update.
Posted by HerrBGone at 12:42 PM No comments: