The Standing Army Jefferson warned about:

Since I can't upload the screen capture from work we'll have to make do with a link: 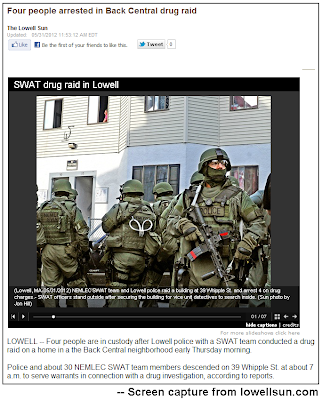 Posted by HerrBGone at 1:04 PM No comments:

Email ThisBlogThis!Share to TwitterShare to FacebookShare to Pinterest
Labels: In the local Cat Box Liner, The Framers were right, Where America used to be

Our .gov at work

Say Uncle links to a list of words that will get the government spying on you.

If “they” can stop We the People from using large swaths of common words it will become difficult – if not impossible – to have a simple conversation.  It’s as if the .gov wants to restrict the free flow of ideas among a free people.  Well, I guess we’ve reached the point where political correctness has worn thin and those who would try to control the dialogue are trying to replace fear of social ostracism with the real fear that the .gov may not take kindly to what we may want to innocently chat about.

Of course we all know that that’s not a bug – it’s a feature.

I recently took the initiative to acquire a drill equipped with a vice that will enable me to manufacture a variety of things.  Link Link Link

And I frequently write about the facility I have put in place to mitigate the effects of the power grid going down.  I can now manufacture my own electricity.  I took these steps in response to two incidents where the power grid went down as the result of a natural disaster and all the food in my refrigerator went bad.  Not that any of it might have actually become toxic or anything.  Still, it’s better to avoid possible contamination that could cause food poisoning.  As expensive as all those groceries were, I just threw the stuff out…  The black out lasted eleven and a half days during the first service disruption!  That first disaster was caused by an ice storm.  The second was from an early snow when the trees all still had their leaves.  They are calling it the Halloween Blizzard though I don’t think it was really that bad.  Link Link Link Link

While we’re talking about the weather, we had an interesting lightening storm last night!  There was a warning from the National Weather Service and everything, though I didn’t see anything from the Emergency Broadcast System…

And while we’re at it, I only saw the first Pirates of the Caribbean movie.

Maybe I’m spending too much of my time on social media…
Posted by HerrBGone at 11:26 PM No comments:

One of my favorite toys is my Steadicam® JR (pronounced “Steady-Cam Jay Are”).  I haven’t used it in a long time because I was having problems with the camera that’s mounted on it.  This very afternoon at lunch I ordered a few things from Amazon.com that will let me referb my rig and mount my much newer and better camera.  (Since it’s now discontinued I figured I’d better grab the stuff while it’s still available!)  Hopefully I’ll be posting some cool videos of my own before too awfully long.

In the mean time, here’s an interview with Garret Brown demoing a couple of the big rigs:


YouTube can be such a fun place to loose an entire evening!

PS: Just out of curiosity: Can someone please explain to me how the New & Unproved interface and composition tools (that make it damn near imfuckingpossible to do ANYTHING creative – even simply embeding a couple of YouTube videos – without resorting to raw HTML coding) is an improvement?  Cause I ain’t seeing it!  Word to the wise, guys, I already bailed on LiveJournal when their interface became unusable.  You need to fix this yesterday!
Posted by HerrBGone at 9:15 PM No comments:

The Stupid is strong with this one!

Matter of fact, Mum and I heard the BOLO on our scanner when it happened.  I probably would have missed it in (the on-line edition of) the paper otherwise.


EDIT: Fixed my jaw-droppingly lousy spelling.
Posted by HerrBGone at 7:41 PM No comments:

What do you call an update that isn't?

I was going to write something about our busy weekend:


It's been a busy weekend and I don't know where to start in telling the story without this post turning into one of my epic in length of not content posts.

On second thought, maybe I'll just jump in the shower then go to bed.
Posted by HerrBGone at 10:19 PM No comments: