And just because I can – I present a song that changed the course of a Nation:

Posted by HerrBGone at 1:21 PM No comments:

Email ThisBlogThis!Share to TwitterShare to FacebookShare to Pinterest
Labels: Humor (well at least I think so...), Music

I just added a new section to the right sidebar: Wicked Useful Sh … stuff.  That’s where I plan to post wicked useful links to wicked useful resources around the web.

The first one on the list is GasBuddy.  In particular; the GasBuddy Heat Map.  This is a zoomable map that shows by color what the average gas prices are running on a county by county basis all across the country.  By zooming in you can see what individual gas stations have been charging within the last 48 hours.  (Or at least what the price was the last time a GasBuddy ‘field operative’ went by the station.)  If you sign up you can contribute to the site by reporting the gas prices you see as you go about your daily travels.

If you have suggestions for other sites that are Wicked Useful let me know in the comments.  If they make the cut I’ll add it to the list.
Posted by HerrBGone at 9:19 AM No comments:

Posted by HerrBGone at 8:44 PM No comments:

Email ThisBlogThis!Share to TwitterShare to FacebookShare to Pinterest
Labels: Music

Since my day job blocks Picassa I'm linking this via Facebook.  Hopefully you will be able to see what I see.  Just, wow...

(I'll update this post from home to put in a link that FB won't go and break on us.)
Posted by HerrBGone at 8:59 AM No comments:

To all of you who voted for candidates that had no chance of winning:

President Obama thanks you.


I, however, do not.  As I had originally written the talkback that Cam paraphrased on air:

Looking at Florida and Ohio, in particular at the votes for "other" it looks like enough voters are playing with their Johnson to screw the rest of the country. 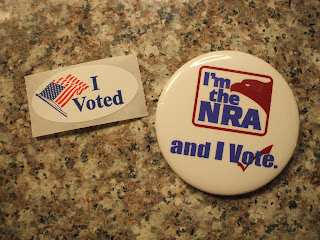 And I’ve done something about it.

I had the button pinned to the draw-string of my hoodie and while I was in line waiting to check out after filling out my ballot.  An election worker asked me to remove it.  “I know it’s not endorsing any candidate – but it’s against the rules.”  I didn’t make a stink about it.  I think my point was made by then anyway.  Apparently he didn’t notice the ‘antique bronze’ NRA logo pin on my vest’s collar or my standard membership pin on my shirt’s either.

Now if enough of my fellow American’s have voted in a similar manor to me and mine we can finally both fire and evict the current resident of 1600 Pennsylvania and hopefully get the Ship of State off the rocks and headed in a better direction.

Polls close in a little under an hour here on the right coast.  I don’t know if we’ll have to wait for eight o’clock Pacific to get any returns other than the unprecedented tie in Dixville Notch.  Personally I’m sitting here with fingers and toes and everything else crossed (which is hopefully not too much of a sharing violation) waiting for the outcome.
Posted by HerrBGone at 7:15 PM No comments:

Email ThisBlogThis!Share to TwitterShare to FacebookShare to Pinterest
Labels: Who’s watching The Watchers?

Reading between the lines

Maybe I’m seeing something that isn’t really there.  Then again, maybe I am…

In this AP story reprinted on the website of the local cat box liner we read about a newly announced merger and/or acquisition.  It seems that the exclusive manufacturer of the paper used by the Bureau of Engraving and Printing to make US currency has agreed to purchase a Kennebunk Maine division of Hallmark that specializes in making stationary.  Crane & Co. CEO Stephen DeFalco is quoted as saying the acquisition of William Arthur gives his company “flexibility in the marketplace.”

Do they foresee a time – possibly in the not too distant future – where the need for their primary product might go into decline?  I do.  Are they positioning themselves to be able to survive should that happen?  That would seem prudent.
Posted by HerrBGone at 8:28 PM No comments: