I did it again!

So as we were heading out to the Pepperell town-wide yard sales I told Mum that I was going to be looking for end mills and crank handles.  Both would be used with the new vice on my drill press.  I didn't find any end mills today.  But...

Last year, I think it was closing day at the flea, I bought a much nicer scroll saw than I had been using in my little shop up to that point.  It was used and the deck had a light coating of rust, but it wasn't anything that a little elbow grease couldn't remedy.  So it came home with me and I played around with it for the next week getting it all cleaned up and trying a few test cuts with it.

Then the very next week at a yard sale I found another one.  Absolutely identical except for one little difference.  This one was brand new in the box!

I bought that one too.

The first (and it's predecessor if I remember to grab it from the shop in the morning) will be available for purchase tomorrow bright and early at Hollis.

Back to the crank handles I was looking for for my new machinists vice.

You should have seen the fun I had getting that bench top drill press off of the old table saw body that had been its base!  I can't lift the thing.  With my bad back it's much too heavy.  So, employing the work smarter not harder philosophy I put together a two step rigging plan that got the job done.

Phase 1: I tied the table of the drill press to a structural frame that's holding up the roof over the shop with several wraps of paracord 550.  Using the table height adjusting crank I lowered the table until the rope lifted the drill press off of the saw making sure to carefully balance the machine so it wouldn't tip out of its cradle and crash to (possibly through!) the floor.  Once lifted I tied the head to the beam with more rope to stabilize the machine.  Then I wrestled the old saw body out from under it.  With that out of the way I removed the stabilizing rope and lowered the drill press with the table height adjuster onto the stool I keep in the shop.  On that I could walk it over to a point where the ceiling was a few inches higher and move on to...

Phase 2: With a tad more room above the drill press I rigged it this time with the same small block and tackle I had tried unsuccessfully to move Thunder with.  This time it worked like a charm!  Easily and under full control the drill press was lowered to the floor where I could move it out of the shop on my 2-wheeler.

The new drill press looks nice in the shop standing where the old one was.  And it takes up quite a bit less space.  With a shop as small as mine space is really at a premium!  Another benefit of this drill press over the old one: I can open the belt cover to adjust its speed!  The old drill press was right up against the ceiling beam and the belt cover couldn't be opened.  So it stayed set to the speed it was at when the guy I bought it from delivered it two years ago. If I'm going to try to use this for milling it is imperative that I be able to adjust the RPM of the cutter.  I'm actually going to get a chance to learn about speeds and feeds through first hand experience.

I'll update this with a picture of the new rig later in the day tomorrow.  Right now I should have been in bed a couple of hours ago.  The flea starts awfully early!

Attached to the vice: 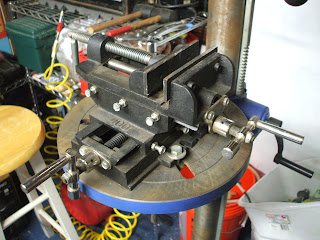 Attached to the drill press: 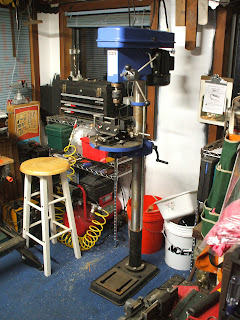 Oh, and I sold last weeks vice at the flea market today.

I think I'm going to move the new drill press to where the red tool chest is sitting with my brown machinist's tool box on top and put the chest and tool box where the drill press is now.  With some very monor tweaking I think that layout will give me the best access possible to my stuff and will minimize the floor space taken up by the drill press.

I didn't have much time to wander around today at the flea.  Car show weekend is always busy.  So I couldn't track down any actual end mills.  For short money I picked up a set of carbide router bits at Harbor Freight this afternoon.  That was about the closest thing they had to what I was looking for.  We'll see how that goes working some soft stock.  I'll have to see what kind of wood I have in stock to play with.  :-)
Posted by HerrBGone at 10:59 PM